I'm not sure why, but I had an idea to help my mom celebrate a milestone birthday with some physically distanced flamingoes. Party rentals charge about $75 for a couple of days so I thought I'd make my own and then I wouldn't have to worry about picking them up in time.

First I drew a template and cut ten shapes out of thin plywood. I stapled on a small stake for a 2nd leg. Then they got spray painted pink. 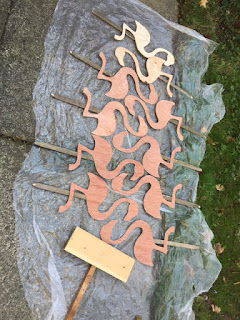 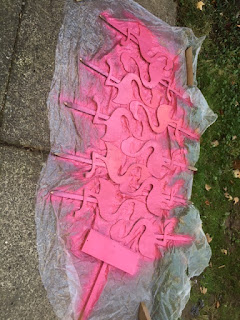 Lastly I spray painted the beaks gold and used a black sharpie for the eyes. Then I snuck out to my parents house at 9pm the eve of my Mom's birthday. It was a bit of a rainy evening and fairly dark, but there was a streetlight nearby so I thought I might get caught. I tiptoed around the side of the front lawn and stuck the sticks in the wet ground.

The next day I got a text of thanks from my parents. My mom said I made her day! 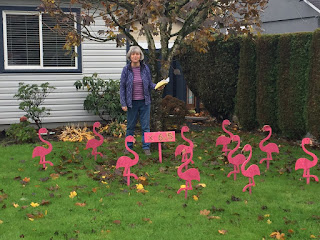 However the interior-grade plywood did not last long in the pouring rain: the next day one of them got a headache. 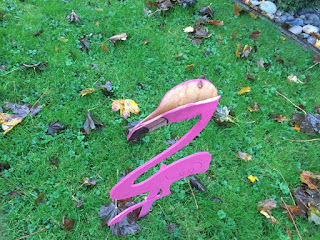 This is a song written and recorded last year with a couple of friends. It was professionally recorded but the music video...not so much :)
Posted by Andrew at 17:47 No comments:

As some of you know, I enjoy building Theatre Sets. However, they are temporal creations and cannot stand the test of time. Usually they have to last 2 or three weeks, then they get taken down and recycled/thrown away. I have had a few recent sets not even make it to the stage.

The latest constructive casualty is due to the COVID outbreak in BC. All public gatherings are cancelled indefinitely. I had made this particular set for the musical, The Secret Garden. It was quite large, and I had taken extra time to make it easy to set up quickly. But as it can't go ahead, it had to go back in storage. I had a sad (though beautiful) day taking it apart. 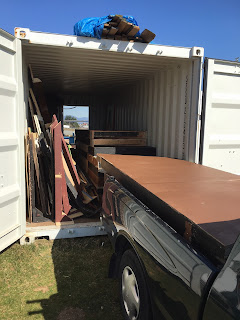 While journalling tonight, I caught myself writing the phrase 'God willing' as I described my hope that the set would be useful in the future. I then thought of the passage in James 4:13-15 (NIV) which reads:


Now listen, you who say, “Today or tomorrow we will go to this or that city, spend a year there, carry on business and make money.” Why, you do not even know what will happen tomorrow. What is your life? You are a mist that appears for a little while and then vanishes. Instead, you ought to say, “If it is the Lord’s will, we will live and do this or that.”

I think this public health crisis is a good reminder that we are not 100% in control of our lives. We do generally struggle along and make our schedules work for us, but there are never any guarantees. And that's okay.
Posted by Andrew at 23:16 No comments:

An idea that Malachi and I have had for awhile is to build an outdoor pool table in the backyard. However our plans were complicated by the accidental arrival of an air hockey table last September. Our neighbour was trying to get rid of it, and so I gave him a few bucks. It didn't fit in the house though--I had hoped it could work as a coffee table. So it sat outside in the rain under a plastic bag for a few months.

The air hockey table can't really get wet, so it was necessary to build a shelter for it. 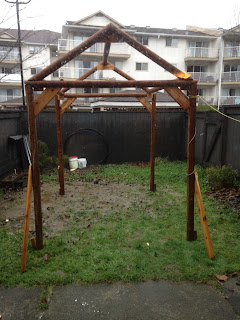 This was accomplished with some landscape ties. Later a roof was added that was made of 1x2 and clear plastic. It was soon tested in the wind, rain, snow and ice but survived.

Next the air hockey table was hung from the rafters via pulleys. 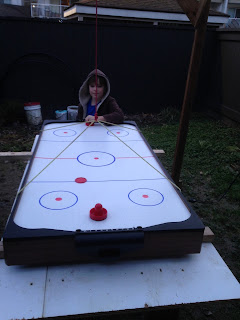 This way it could be lifted out of the way and stored in the ceiling so that the pool table could be used.

Lastly the pool table was constructed, and finished with outdoor carpet and wire baskets for pockets. 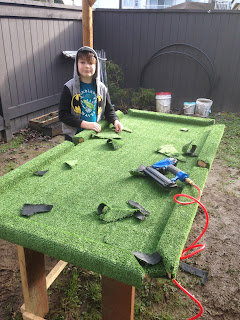 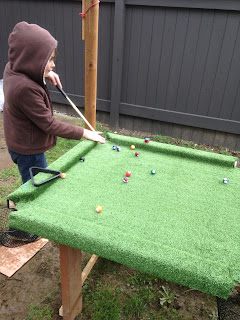 We still need to buy proper balls and cues but for now we used Malachi's toy set and it worked ok.
Posted by Andrew at 18:09 No comments:

A month or so ago I was driving a friend/customer to Vancouver to pick up a bed. He complimented on my truck, saying how well it was running (for its age). Well, we were in the tunnel under Hastings when I noticed my battery light flicker on. I was a little worried that I'd get stuck in Vancouver, but it flickered right back off again and was fine, in fact so fine that I kind of forgot about it even though it started to blink on with more frequency.

Then last week it was kind of on all the time. I decided it was probably the alternator, or maybe the battery. But it kept starting, no problem.

But eventually I decided I'd better get another alternator. I called around to the scrapyards, if they'd had one in stock it would have been less than $50, and new was $250-$300 from the auto parts places, so I ordered one on Amazon for $170. It was a couple of days shipping, and the day before it arrived my truck died.

I wasn't too far from home so I took the bus home, put an old battery in my backpack, and biked back. I switched batteries, the truck started, and drove for about 3 blocks before dying again. So I bought a new battery from a store nearby and managed to nurse the truck all the way home. 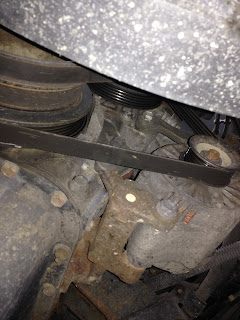 I took out the old alternator and waited until the next day for the new one. It went in without too much hassle. And truckie's been working fine ever since. Well, mostly fine--sometimes seems to run a little rough, I might have to get my fan clutch checked out...
Posted by Andrew at 21:44 No comments:

Victor and Malachi and I had a race in Harrison. We rented some dune buggy bicycle things. One of them had a side car. 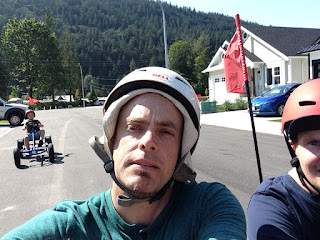 Victor and I were in the lead. 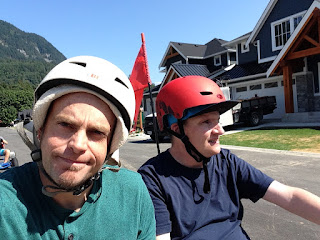 Despite our best efforts, Malachi started gaining in his Malachimobile. (I suspect he got a mushroom) 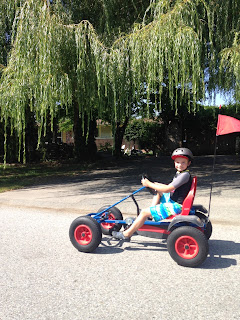 He pulled even with us! We pelted him with squid ink, turtle shells, and a lightning bolt, but it was no use! 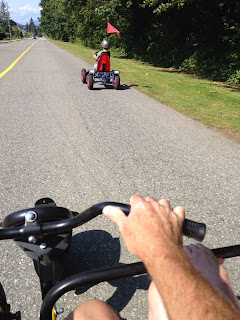 He passed the finish line well ahead of us. We hung our heads in disappointment.

But it was a good day anyway. We cooled off in the lake, headed to the pub for supper, and were home before bedtime!
Posted by Andrew at 18:07 No comments:

Again, a dearth of posts lately. Apologies to all four of my loyal fans! Now that I finally joined Facebook, blogging has really slowed down!

On my birthday this past February I took Victor and the kids up Sasquatch for tubing. Here is a picture of us riding the moving sidewalk: 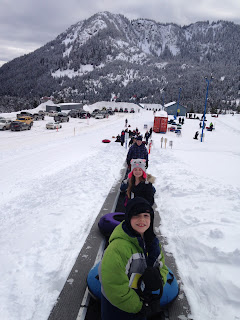 Then sometime this spring the kids went shopping for new shoes. It was a nice day and they wanted to try out their shoes on the soccer field near our house (how many kids have artificial turf a one minute walk away?). I like this picture of Malachi in action. 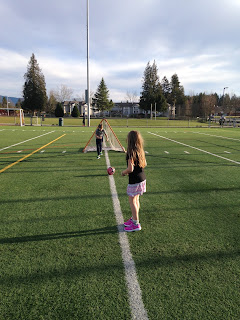 Tomorrow we are striking the set for Midsummer Night's Dream. No new plays until the fall. Lots of carpentry jobs in the pipe, though.
Posted by Andrew at 21:37 No comments: